Svarog – The God of sun, fire and blacksmithing

Svarog- a slavic god, who is credited with a relationship with the heaven, sun and the fire and also the blacksmithing. He’s the only deity, whose existence is confirmed on both western and eastern slavic areas. The etymology of his name might have a connection with a sentence “swarzyć się” (which means to quarrel, or  be angry), however, researchers are looking for an iranian origin of the name Svarog, where you can find the word “hwar”, which means the sun, whereas in sanskrit “swar” it is a sun, glow, heaven.

In the chronicle of Thietmar of Merseburg, there’s a quite detailed description of the Svarog’s temple and the rituals celebrated by Veleti/Lutici from Polabian area in honor of this deity.  According to Bruno of Kwertfurt (contemporary with Thietmar), people, who were worshiping the Svarog, had a habit of sacrificing a christian man (this is what happened to the bishop, Jan Meklemburski, who died in 1066 by martyrdom). Another chronicler, who confirms the existence of the cult of Svarog, is Adam of Brema, a canon, who lived in the second half of the XI century.  He described Rethra borough  (Thietmar’s Rodogosc) and living in there Redarians. They had a temple for many deities, but the most important one of them is Radegast (In Thietmar chronicle-Svarožič) In the copy of the chronicle of Byzantine historian, Jan Malalas, created on Rus in the XII century, we can find additions from a russian commentator, who is trying to explain the deities names meanings, by using slavic equivalents – Therefore, Svarog is identified with the god of fire and a blacksmith Feos (Hephaestus), and his son, Dazbog with the sun (Helios). At this point it is good to think about the connection between Svarog, Svarožič, and Dazbog. On the one hand, the name Svarožič, as A.Bruckner proves, can be simply a diminution and mean a small/nice Svarog, however, on the other hand it can mean his son. The issue if Svarožič/Dazbog is a son of Svarog or his personification is not completely resolved.

Both the origin of the name Svarog and the chronicle comparisons to other deities are showing us him as a solar deity. He’s directly connected with a sun and thus also with a fire. He become a guardian of the hearth, but also of the sacrificial fire (although the rites, where the holy fire appeared were right not only for Svarog but also for other deities, such as Perun, Veles). As a divine blacksmith, he forged the lightnings and helped Perun with his fight againts his antagonist – Veles. In some versions, Svarog was also the creator of the sun (that’s why his son Svarožič/Dazbog is identified with the star, that is closest to our planet). The Russian researcher, R.Jakobson also compares him to the fiery falcon, Rarog (pronunciation: raruk). In Veleti, he also served a function of the god of war for some time.

Despite some inaccuracy and discrepancy as to the origin and functions, that Svarog along with his offspring served, you can see clearly, that he was one of the most important deities on the slavic pantheon, personifying life-giving and creative properties of fire. For a long time after the christianization and passing into oblivion of slavic gods, the ritual of worshiping the sun every morning has been kept, which obviously  points out the special meaning of the god of sun and fire in the slavic mythology.

Poprzedni Noonwraith
Następny Veles- the Lord of the underworld 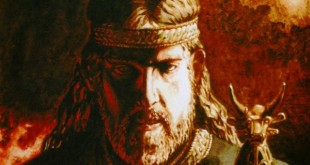 Veles – Also known as Volos. One of the most important slavic gods, right after …