Home page / Slavic Gods / Veles- the Lord of the underworld

Veles – Also known as Volos. One of the most important slavic gods, right after Perun and set in opposition to him. His origin, meaning and interpretation cause many difficulties to the researchers. His name might be connected, among others, with Greek Champs-Elysees or nordic Valhalla. Such connection seems very likely, because of the fact, that one of the Veles’ “tasks” is a power over a land called Navia, which is a slavic underworld – the oposition to Perun, mentioned before, is visible now, since he’s the God of Heaven and the lightnings. Aleksander Gieysztor compares this couple to the indian divine opposition of Mitra and Waruna. Another feature that confirms Veles’ power over the underworld is his ability  of transforming into a Żmij (masculine form of the Slavic word for “snake”), who was a guardian of the entry to the undergroung land. Some similarities can be found between Veles and a Baltic god of the dead, Velinas (Vels), the case is alike to the situation of Perun and Baltic Perkunas. Also the sacrifice for Veles, which is a black, 3 year old bull, is typical for deities connected with the underworld.

Controlling the underworld is not the only task of Veles. Sometimes he’s called a “cattle god” (skotij bog), because he’s considered a lord and a highest guardian of the cattle, which reflected prosperity and was a meter of wealth on the Slavic area (which again points out the belonging to the category of chtonic deities, because it’s also connected to the fertility of the ground). He has a force that lets him protect the herd from the wild animals, especially wolves, since this god is  associated with  animal side of nature (opposite to Perun, who stands by human side). Because of his influence on prosperity, he’s sometimes considered a god of merchants.

There’s a couple more other aspects credited to Veles. He’s considered a god of law and oaths ( all the people swore on his name, on Perun’s name – only warriors), art, craft, but also magic and foretelling the future, which is based on the existance of wolchs, in other words, magicians and soothsayers, also known as Veles’ sorcerers. He’s familiar with the contact with poetry and songsters, as evidenced by the bard Bojan, blessed by this deity with an inspiration and in “Słowo w sprawie Igora” (“A word about Igor’s case”) he’s called Veles’ grandson.

Under the influence of a Christian dualism Veles was reduced to the devil’s role and the echoes of this metamorphosis can be found, for instance in  a Czech phrase “k welesu” (to the devil). However, researchers are looking for relationships between Veles and a few Christian saints. A. Bruckner agrees that Veles might be a secondary adaptation of St. Blaise (Włas), who is, among others a patron saint of pets. Saint Nicholas also performs such patronage and we can detect some connections with him and a discussed god, because this saint, on the one hand, guards the entrance to the underworld and on the other hand he stands in opposition to St. Elias – researchers see a reflection in this relationship to the Slavic collate of Perun and Veles.

As you can see , Veles is an ambiguous god, who has many different features, which paradoxically shows his importance and meaning in a Slavic pantheon. Despite his dark aspects of an underworld god, he was crucial in daily life of Slavics because of his function as a guardian of the cattle (which means prosperity), therefore, the fact that he’s placed on an equal footing with all-powerful Perun or stands right after him, shouldn’t be surprising. 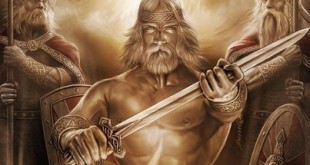 Svarog – The God of sun, fire and blacksmithing

Svarog- a slavic god, who is credited with a relationship with the heaven, sun and …